The following is the first few pages of the original Japanese Manga release of Hanaukyo Meido Tai.

2 Anime series were based on the above title.

Another year has past and we’re now in the year of the Ox.

Wishing everyone a happy and prosperious 2009!

For those Fruits Basket Fans heres your image…(stolen from animeyume.com). 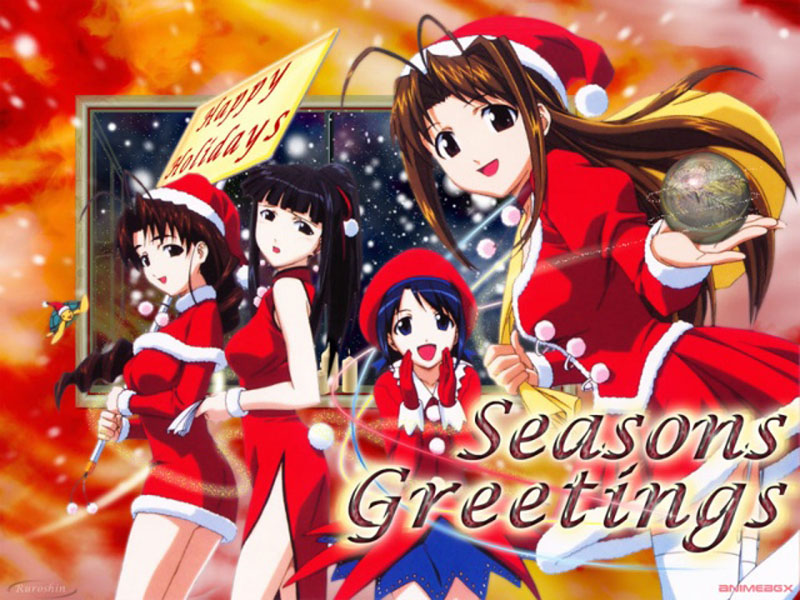 Its been over a month now and I’m still living in the same hotel in Geylang. I picked the hotel knowing its location due to its exceedingly cheap room rental rate, however it has some side effects, namely the hotel is busy 24hrs, due mainly to the close proximity of the “ladies of the night” and the constant sound of the elevator bell and the sound of high heels on tiles can get a little annoying. I am now eagerly awaiting the move in date for my apartment, just 2 more weeks.

Last week me and collegue decided to pay a visit to Gyu Kaku – a Japanese Barbicue Restaurant in Chijmes, I!’d been there before with some Japanese friends and it wasn’t bad, so I figured a second trip was a good idea. Wrong. We arrive late in the evening, and they took us in without hesitation and gave us a table. About 30 minutes into the meal, it became apparent we were not eating fast enough. Suttle hints like unpacking the foil warpped parcels at 10x normal speed, mashing the fish insted of lifting it out etc. We finally finished the main part of the meal, ie the barbicue part, at which point the waiter thought it would be highly funny to inform the rest of the staff we’d finally finished, and shouted out “And they’re done!” in Chinese, which was followed by a loud cheer. Clearly not knowing that my collegue can speak 7 languages, including Japanese and Chinese. This was the rudest behaviour I have ever seen in any type of eatery, and was appalled. When the waiter came back a few moments later, my collegue cut him off before he could say anything, and said “Ice Water, because we’re done!”, the look on the waiters face said it all, and the staff suddenly went rather quiet. We had our ice water, then ordered some ice cream, for no other purpose than to slow it down a bit further and make our point. We paid, collected the change and ensured no optional tip was left – we were foreced to pay a 10% service charge which was auto added on the bill, but they werent getting anything else. They tried to be super friendly as we exited, we ignored them and walked out. We will never, ever visit any of their restaurants again, Singapore or Japan. I suggest you avoid them as well.

Other activites over the last 4 weeks include a mamoth book hunt, we have been checking out the local book shops quite a bit, and as a result I have managed to double my manga collection. I was very pleased to find Hayate The Combat Butler and have now got all but 1 of the first 9 volumes. I do now also have the complete set up to vol 19 of Tsubasa “Reservoir Chronicles”, including Vol 14 – which was apparently quite hard to find, according to someone we met in Borders Orchard Rd, as it turns out a trip down to Kinokuniya Book shop just down the road had a huge stock of said volume. I have also increased my DVD and CD collection with new albums from Guns n Roses and Yui and some more Korean horror movies.

We also took a day out to visit the Anime convention in Suntec the other week, lots of lovly cosplayers, lots of model kits and some manga and dvd stands. Bought a couple of mangas, but nothing else of real interest.

There is a little problem with the blog at the moment, it appears I neglected to set the wordpress option to store content based on date, this means it puts all the files such as photos in one place. Didn’t occur to me however that when it encounters a new upload that happens to have the same name as an existing file, it over writes it without prompting. This has caused some of the pictures from the Asia Mini tour, Singapore, Japan etc to get replaced with photos from other posts. This will take some time to fix, therefore no more photos for a little while.

The Anime side of things has become a little crazy of late, my Anime Blog is coming on nicely, and the video library has taken off to insane levels. It got listed as the first result for “anime video library” in google uk a little while ago, and now its so popular its using over 400GB of traffic per day. If you get a “suspended, bandwidth exceeded” page come up, its because its used too much traffic that day, so just try again tomorrow, early in the morning CET is best. In addition, I am now the Design Editor for the official Fansub.TV Webzine – j-Zine, our first issue is already out, you can read it here.

I am also pleased to announce that I am leaving the UK and moving to Singapore at the end of October, right now its a crazy time of trying to pack and organise everything for the move, so there wont be much time for updates on here for a little while.

And finally… last week I saw a Meido on the tube, beautiful colourful maid uniform and hello kitty accessories, was at Euston Northern line station, first time I have seen a maid since the MVM Expo at Excell, and first time on the tube – if that was you, or if you have a Meido sighting, leave a comment!